My submission for the Illustration Friday theme of this week: Homage 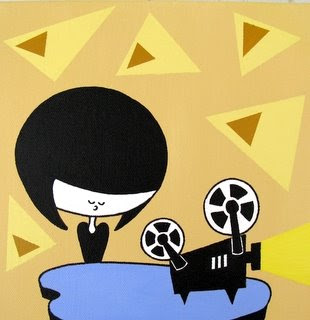 Sally pays homage to film by devoting all of her home movie viewing to the Super 8 film format using her old clunky & noisy projector. Sally's favourite films are Hammer Horrors. Sally lives with nine cats. They are called: The Cat of the Opera, The Curse of the Cat, The Revenge of the Cat, The Invisible Cat, The Mummy Cat, The Cat of the Baskervilles, Cat AD 1972, Cat: Prince of Darkness, and The Two Faces of Dr. Cat. Sally usually refers to each of them simply as, Bob. Sally's lifelong dream has been to feature on a Fantale wrapper. The closest Sally has come to this was in having her name featured on a tree in grade six. The feature was in the form of a declaration of love scratched into the tree trunk by a boy called Sam. "Sam ♥ Sally" it announced. Sally later discovered that Sam was in fact publicising his love for her best friend. Also called Sally. Best friend Sally is now a critically acclaimed actress. Best friend Sally & Sam's growing love for each other eventually lead to marriage. Sally was Sally's bridesmaid. Sally reads Sylvia Plath. Sally rarely smiles. What's to fuckin' smile about when your biggest claim to fame was a misinterpreted childhood crush scrawled into an old tree that was long ago removed to make way for the construction of a multiplex cinema that screens schmaltzy happy-ever-after romance ad nauseam.

Intermission over, now back to the movie...
Email Post
Labels: Art

Anonymous said…
L love that Sally rarely smiles and of course... reads Sylvia Plath. Girl after my own heart. Wish my hair would stay in place like hers.
WONDERFUL ARTWORK!!! You are the female Charles Schultz, Miss Australia! Bravo!
xoxo
Karen
March 30, 2008

Anonymous said…
hooray harriet!!! was wondering when you would blog more of your own art. dynamite painting! the story was very entertaining. your writing style reminds me of dorothy parker. you know her? she's great. you're great!

Hey Harriet said…
Donat - Yes I do know Dorothy Parker! One of my fave writers ever! I'm not worthy of such a comparison though, but thankyou :)

Ian russell said…
great retro, harriet. yeah, I miss those film projectors - I can understand how they work!
March 30, 2008

Unknown said…
Wow.. such a homeage to 8mm film. I like how you use simple shapes and flat colours to do your illo. They blend very well. :)
March 30, 2008

Anonymous said…
Ah, Hammer Films...Some of the best! And poor Sally: will she ever put down that dogeared copy of The Bell Jar in time to fall in love again?

Nice work! And thank you for visiting and commenting on my latest illustration.
March 30, 2008

Anonymous said…
I think Sally's mildly disappointed because her projector was a lowly 8mm. 16mm is twice as good, right?

Really cool painting. The projector looks great! I like its pointy feet.
March 31, 2008

High Desert Diva said…
Hey...had a message on my blog re: your comment on thieving Malaysian monkeys. M. Kate from La Vie Est Belle blog wanted to know where that happened. Want to meander over to her blog and let her know?

Unknown said…
Hi there, tks for dropping by, so good to know more friends and i love your heading..its so COOL, enjoyed reading all the older post too, so will be back often,you have a fantastic week ahead :)
March 31, 2008

Hey Harriet said…
Diva - Thanks. Wandered on over to La Vie Est Belle's blog with the monkey report. Glad I did, it's a cool blog :)

imwithsully said…
Poor Sally and her cool projector. I guess she doesn't mind about the convenience of a DVD. What bold graphic style!
April 06, 2008