Shadows in the Cinema

Yes, my obsession with shadows continues beyond Sundays! Currently on at the Qld Gallery of Modern Art is a very exciting film program running until the 30th November. It may be of interest to the Brisbane Shadow Shot Sunday players. Or not. And all the films are FREE! Which means more money left to spend on coffee and cupcakes at the GoMA Riverside Cafe. Woohoo!

Out of the Shadows: German Expressionism & Beyond

The Australian Cinémathèque presents a major retrospective season showcasing German film in an expressionist vein from the silent period onwards. In Berlin after World War One, a striking style of filmmaking developed that experimented with set design, lighting and shadow. These ‘expressionist’ films, rich in symbolism, played on images of madness, monsters and modernity. Ranging from classics to lesser known films setting the scene for the period, ‘Out of the Shadows’ includes Weimar musicals and comedies, classic film monsters, cities of the future, battles against nature, femme fatales, as well as recent films influenced by expressionist aesthetics. The program also charts the move of German directors to America in response to the rise of Nazism, their influence on Hollywood film production and on the development of film noir and horror genres - GoMA Website 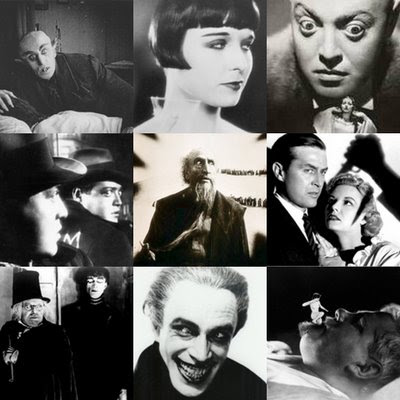 Above images sourced from the GoMA website
To those who don't reside in Brisbane and are a little sad about missing out on this film program, I can do something that may make up slightly for your loss. I can eat an extra cupcake for you. Yup! I have such a big and generous heart! Off to polish my halo now. Please feel free to specify cupcake flavour preferences and I'll do my best to accommodate.

I've been tagged by Bec from The Small Stuff blog for the On Your Walls meme. I was only tagged two days ago and I'm responding already! Such a speedy response to a tag is a first for me! Actually, the fact that I've responded at all to a tag is a rare thing. It's not that I don't appreciate being tagged. It's just that I'm not very good at them. So please do forgive me if you've tagged me and I haven't followed through. This one is an easy peasy one because I'm able to cheat! Back in April I participated in Marilyn's Show Me Your Wall feature on Pulp Sushi. What's On My Walls now hasn't changed since April, so you can click here to view my walls over at Pulp Sushi if you didn't back then and you're interested in taking a peek now. Thanks for your interest in my walls Bec! If your interest extends to wanting to come on over to clean the accumulating cobwebs in the corners please don't hesitate to pop in anytime! Thanks also for sharing your walls! They're super sweet! I'll not tag anybody in particular but if you'd like to share what is On Your Walls please do! I'd love to see!
Email Post
Labels: Films

Sweets 'N Greets said…
Wow! How aweome to showcase the silent films. I must say, the mosters back then seem more frightening because they looked real...flesh and blood. Todays monsters are mostly computerized! What is the scare in that?

please sir said…
Thanks for all the information - quite interesting!
September 24, 2008

Chubby Chieque said…
Hmmmm... guess I don't dare to the noir monster on my wall, am a bit of chicken mumma*LOL

But, I do like your idea, in my son room. He will love it.

SandraRee said…
I find all old black and white films fascinating. And with the mention of shadows even more so. Would have loved to have seen this!

But since I can't and you want to make up for it by eating an extra cupcake for me, in keeping with the film's theme... I'll (you'll) have a German chocolate with cream cheese icing sprinkled with nuts please. :D

I so enjoyed viewing your walls! I knew that you would have great art hanging on your walls and I love your Momiji Dolls collection!!

Hope you are enjoying your warm weather!

Hot Fudge said…
What did we do in Brizzy before GOMA? The movies look very tempting, don't they?

Impossible Alice said…
You're not eating my cupcake! I'm going to have to drag myself out of the house and go eat my own :) Bu thanks for the offer, I'm sure it came from the pure goodness of your heart ;-P
September 24, 2008

Unknown said…
hello T...i am not just sick..practically bedridden since yesterday...so blogging from the bed is no fun :( ANYWAY, had a peek at your walls..wow, very impressive and colourful...love them all. So when do I get an invite? i scheduled my sss for this sunday...sorry if i am slow in my rounds..will try to catch up in between..
September 24, 2008

littlebird said…
never before have i read of someone willing to participate in such a selfless act as you are prepared to do.
go forth and eat any cupcake of your choice in my name and know that i am truly humbled by your kindness ; )
September 24, 2008

A Wild Thing said…
So much has transpired since I joined SSS with you guys, for one, I feel like I know so many new people, even though they are virtual, they are still best friends. But the kicker is, the eyes that have been wide open to the world of the shadow...me and the dog now take day trips just seeking the perfect shots...eyes wide open all the time!

Love the old black and white movies, something about them still just scares the crap outta me! So errily beautiful and the futuristic, complex and thought-provoking.

Love your walls, so brite and cheery!

High Desert Diva said…
Movies like this are why I don't like black & whites colorized. Spoils all the (shadow) fun.

Anonymous said…
hey harriet, i like all of your collection but what i really would like is your vintage interactive piece. it would look perfect in my house. i bag first dibs should you ever wish to part with it!
September 24, 2008

Bec said…
Oooh, I'll definitely have to try and get to this exhibition - it sounds amazing. One of my favourite all time old films is Fritz Lang's Metropolis (who can resist a bit of Film Noir mixed with Sci Fi? Not me!!!). I'm such a nerd I've even seen it as a play, have the book that was put out in the 80s, and I also enjoyed the technicolour version released in the 80s, which was put to a Queen soundtrack (if you've never seen it I'd highly recommend it!) :P

And where do I start on your walls? Oh boy - I LOVE the interactive artwork. That is awesome!!!! And your Momiji dolls look so perfect in that little house. So many beautiful things to look at in your house (and it all looks so light and airy - and neat!!!!) Thanks so much for sharing - I got so much voyeuristic pleasure checking out your walls :)
Cheers, Bec
September 25, 2008

Sarah McBride said…
It is amazing what old school horror films could do and the creepiness and atmosphere they could convey with one well placed shadow.
September 25, 2008

picciolo said…
i bet you have eaten loads of cupcakes now! What a great looking film festival
: )
September 26, 2008

The Summer Kitchen Girls said…
Karrie would like you to eat a cupcake with some plump cranberries in it - myself - something with a lot of frosting perhaps....and enjoy yourself Harriet, and think of us, won't you??
See ya Sunday!
Karla & Karrie
September 26, 2008

Anonymous said…
Free movies!? Wish I were living there! ;-)

Amalou said…
Well, they are some frightening faces in the shadows of the past.

Your walls are very striking with those beautiful art and decor. I have also been tagged to show off my walls. I don't have much to show. I guess there's plenty of crayon scribbles and dirty finger marks on the lower parts, if you call that art?
September 26, 2008

Ali said…
Great shadowy exhibition - love to go and see it - AND, I'm happy to indulge in an extra little cake for those who can't make it too! ;)
Thanks for sharing your walls Tracy - they look so 'together' and with some lovely pieces. For an art teacher, my walls are shamefully bare ... stacks of pictures waiting to be hung (hey, we only moved to this house 18months ago ... I'll get around to it soon!!)
September 26, 2008

Mary-Laure said…
I just love German expressionism in all its forms (paintings where especially great too). Enjoy those films!
September 27, 2008

Lisa's RetroStyle said…
I hope you had an ooey gooey chocolate cupcake for me! Those are some spooky photos!! The ones from the GoMa...not on your walls...your walls are fun and eclectic!
October 02, 2008