Streets of my Town

Artforce is a public art project that encourages residents to show pride in their local community by transforming Brisbane's TSBs (traffic signal boxes) from bland blue to colourful works of art. Artforce is open to emerging artists, professionals & community groups who have an original idea that reflects the immediate environment, the character or history of the suburbs, community pride or exhibits creativity. The project has been operating for many years now and has enhanced the look of Brisbane's roads, providing a high profile art presence in Brisbane. The unique and wonderful designs are viewed with great interest by residents and tourists alike and celebrates the diverse communities, talent and imagination that shines so brightly in Brisvegas. 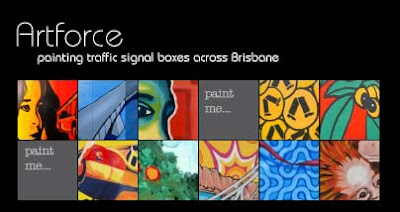 Artforce is free to participate in and if your original design submitted is approved you'll be supplied with an Artforce Pack containing all the materials you need to get going. There's even an opportunity to win between $200 and $1000 as part of the Artforce Awards held every year in November. The 2007 winning entrant was Libby Harward with her adorable "Miss Murray Cod Pink Bubbles" and it can be found on the corner of Albert & Roma Street, City. 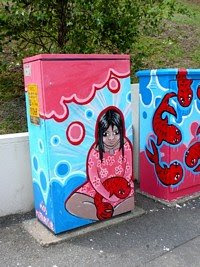 Artforce is an initiative of Brisbane City Council and is managed by Queensland Urban Ecology.

"Round and round, up and down,
through the streets of your town"
- Grant McLennan (The Go-Betweens)
Email Post
Labels: Community Art Street Art

ppdesigns said…
thats a great idea! they should do it across the states!
April 03, 2008

Anonymous said…
This is such a great initiative. How much better does a city look with a bit of art in the streets? Love it!
April 03, 2008

Anonymous said…
What a fabulous project. I bet it really brightens up the everday to see them.
April 03, 2008

Victoria said…
What a wonderful idea! I hope other cities across the nation adopt similar programs!
April 03, 2008

Anonymous said…
Very Cool! When are we going to see Sally on the streets of Brisbane?!
April 03, 2008

Hey Harriet said…
Alissa - hehe...Oh I'm afraid Sally is far too shy to appear in such public spaces. & her ever present sulky mood may frighten the tourists away ;)
April 03, 2008

erinpetersonart said…
What a great idea! I'm going to try to find out how to get it going in my city!
April 04, 2008

Anonymous said…
This is a great idea, and the irony is that as we were driving across town yesterday, Alex and I saw five people in complete Star Wars costumes, waiting at a bus stop. Now I guess this is what counts, where I live, for the city art project or cultural exchange program or something... Anyway, I think I might like Brisbane's idea better. Less expensive to feed.
April 04, 2008

Unknown said…
thats a really amazing idea! i think its fantastic - thanks for sharing that.
April 04, 2008

sound&fury said…
I walked past the one on the corner of Adelaide and Edward streets in the city (at least I hope that's where I was...) with Peter Beattie's head on it this afternoon. If there was ever a competition going for most defaced signal box in Brisbane that one would win it hands down.
April 04, 2008