Currently screening at the GoMA Cinematheque is a program called Icelandic Waves. The program is a series of documentaries celebrating the music culture of Iceland. I was particularly excited about this program because Sigur Ros and Bjork, both musical favourites of mine are featured. I attended the screening of Heima on Friday night. Heima is a film diary documenting a series of free concerts that Sigur Ros performed in 15 obscure locations around Iceland. They performed in deserted fish factories, national parks, ghost towns, remote community halls, the highland wilderness and even darkened caves. The film perfectly captured how the band are linked to the land and how it inspires them and is reflected in the atmospheric music they create. I love their ethereal "soundtracky" style of music mixed with the beautiful and haunting falsetto vocals of their singer. Sheer bliss. The film Heima is available on DVD, but it was nice to have an opportunity to experience it on the big screen. This coming Friday evening are the Bjork screenings. Yay! 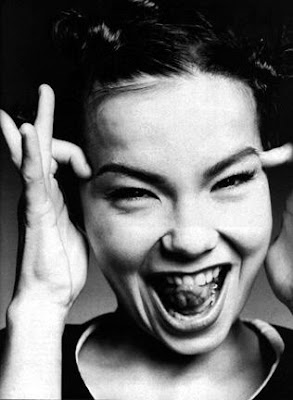 I've been a huge fan of Bjork forever. Well, not quite forever, but since she burst onto the scene way back with the band The Sugarcubes. Even prior to The Sugarcubes, Bjork was in numerous other bands and had been performing and releasing music since she was 11 years of age. The films on Friday night will feature performances by a 16 year old Bjork with punk/jazz ensemble Tappi Tikarras and some rare Sugarcubes footage. Woohoo! As well as the amazing events that GoMA have been presenting in their Cinematheque, they continue coming up with the goods in their gallery spaces. For the first time outside Europe, exclusive to Brisbane, an exhibition of Pablo Picasso's personal collection will be at GoMA in June. I've been looking forward to this one for ages. Only 15 more days until Picasso!
Email Post
Labels: Films Music

Rosebud Collection said…
Have to admit, don't know the band..but sure would like to see the Picasso work..
May 18, 2008

High Desert Diva said…
Lucky you! I've never seen any of Picasso's work. I'll be eagerly awaiting your review of that exhibition.
May 18, 2008

Unknown said…
Picasso's work is really something, very extraordinary..so we'll wait for your post on this.

Bjork? wow..I remembered her in her swan costume in one of the previous awards night, she's brave and outstanding, but i've never really hear her sing :)

Unknown said…
no need or no words i get to write after i saw your blog , nice blog , i suppose are you very busy with your work ,these lines is saying by your work , nice work you have done.

keep it up in forward direction

Unknown said…
no need or no words i get to write after i saw your blog , nice blog , i suppose are you very busy with your work ,these lines is saying by your work , nice work you have done.

keep it up in forward direction

AlasMyDear said…
ooh! lucky, lucky, lucky you!
i love bjork too. i dig her quirkiness! and especially how she is just herself without caring what others think of it. don't think she'll every be swinging around to my part of the world though!
May 19, 2008

Anonymous said…
cannot say that i share your taste in music harriet. bjork i just don't get, & i've never even heard of that other band! i do share your passion for picasso though & look forward to your review of the exhibition
May 19, 2008

bunbun said…
I can't wait to hear about the Picasso exhibit! I have seen an old documentry on his sketches on cable, but this sounds way better!

Anonymous said…
God I must be old because I have no idea who you are talking about!
But I enjoyed the read :)
May 21, 2008

Anonymous said…
Hey! Thanks for blogging about this film. For some reason i've always had a strange fascination with Iceland. I'll definitely be checking it out.
May 21, 2008

Sarah McBride said…
I love picasso and seeing his work in person is always amazing.
Bjork is one of my fave's too. She is so unique and quirky and unapologetic for the way she is. she rocks.
May 21, 2008

Marie Louise said…
Great photo of Bjork!
The Picasso exhibition sound exciting. I wonder if it will tour the rest of the world?!
May 29, 2008

Spitting Image said…
my friend jennifer is Bjorks touring PR and label representative at Bjork's label One Little Indian, which is strange because although her and I and our friends are all big fans, its a little demistifying to hear "...and today bjork had a sandwich for lunch." Either way, she gets travel the world with her, can't beat that.
June 05, 2008