I’ve had issues with Blogger/Blogspot today with uploading photos. Wasn’t working for the longest time. I’ve heard of other people having the same problems but it’s the first time I’ve experienced it. Oh well, it all worked out in the end. Phew! A Shadow Shot Sunday post would not have been any fun without the shadows! The two Shadow Gallery collages this week feature one photo from each participant from last Sunday. The titles I've given the collages are lines from a Dorothy Parker poem called Midnight. Thanks again to those who played along and for being such a creative and fun bunch of shadow shooters! A big thank you also to those who don't participate but still visit here to check out the photos. That means a great deal to me too! If you’d like to participate in SSS, shoot a shadow, post it on your blog on Sunday (or near enough to Sunday), add your link to Mr Linky, and visit other players. Have fun!

Shadow Gallery - The Hills are Webs of Shadows 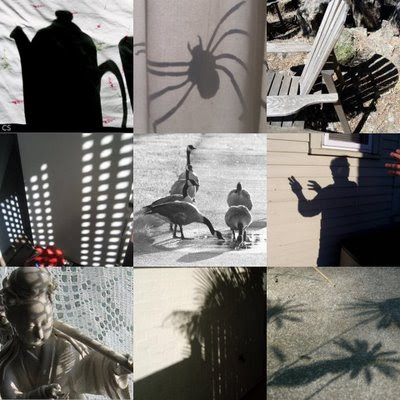 Shadow Gallery - The Stars are Soft as Flowers 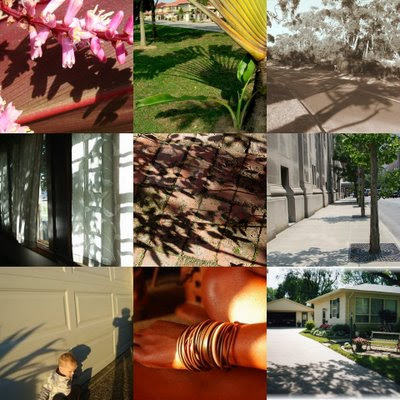 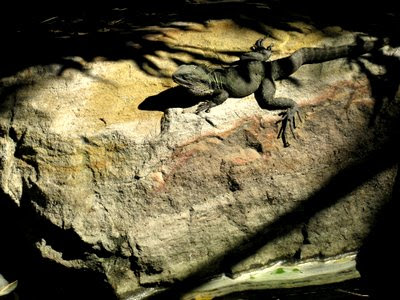 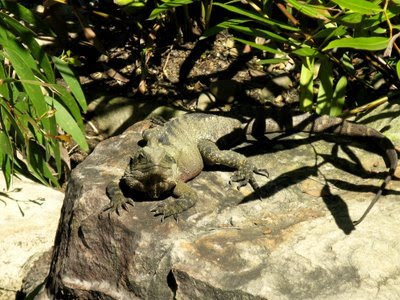 Two shots this time. I prefer the first lizard photo, but really like the way he is looking directly at the camera in the second shot. It was taken about an hour after the first shot and he’d relocated to a sunnier position. Yes I also stalk critters in parklands. He’s almost posing for the photo and if you look really closely (go on, move nice and close up to your computer screen) you’ll see that he is smiling. It's ever so slight, but a smile nonetheless. Happy Sunday!

SandraRee said…
Hey Harriet! I'm sorry you're going through the same craziness I experience with Blogger not too long ago! That's how "Aimer" came about. :) The colleges, beautiful, who knew there were so many shadows from all over the world?! lol

Your lizard is smiling! I have two dogs that smile, one that shows her teeth when you smile at her and the other just smiles all the time naturally. Love that you could capture this! Perfect shadow shots, it made me smile! :D

Happy Sunday to you also and I'm keeping my fingers crossed you don't experience anymore craziness with Blogger! It sure wouldn’t be the same without you and your shadow shots for SSS! We love you T! xo
August 24, 2008

Really like the neutral color theme of the first Shadow Gallery. Beautiful! (That spider shot is wild!)
August 24, 2008

picciolo said…
Hello! I'm glad your shadow shots are still going, this weeks ones look great, I love yours
: )
August 24, 2008

Anonymous said…
Hey Harriet! As long as that little fella doesn't come creeping into my house, I'm cool with it.
Love that smile. Now if I saw him sitting on a rock, you'd bet I'd win the Olympic's!
August 24, 2008

Lisa's RetroStyle said…
He is smiling:) Looks like he has "mutton chops" too.He looks like a happy old man! Great shots of the lizard and the shadows!!

Wonderful collages...as always! So glad to hear spring is knocking at your door!!!
August 24, 2008

Gemma Wiseman said…
As always, your collages are wonderful! I especially love your creative titles!

Love both your pics. In the first pic, your lizrd is clearly distinct from the rock, but the seciond one shows his ability to blend!

Anonymous said…
What a cute little critter!! Does he live in your yard? No, hes not your average blue tongue lizard, he looks a little more special especially with that ever so slight smile!! I love both shots, the second one probably my favourite with the green of the gumleaves against the sandstone and a nice crisp shadow. But i do love the colours in the first pic.
The collages again are a highlight, thanks for putting them together so beautifully, you do a wonderful job. :0) Happy Sunday, hope your exhibition is coming along well, wish i was closer to see it irl, will have to make do with your Etsy store!!
Hope your blogging troubles are over, i lost a whole post the other night with TP and i was one unhappy girl!
Happy Sunday to you to Tracy. Annette :0)
August 24, 2008

Ali said…
He's smiling you say? He looks a bit spiky and scary to me! Great shot (I love that you came back an hour later and he obliged with another photo!
Lovely shadow collages again this week - thank you!
August 24, 2008

The Summer Kitchen Girls said…
Harriet - Hello! We always come over to check our shadows out - Lisa from Lisa's Retro Style always sends us over....we've always wanted to play, so this morning we searched through our pictures and found an iguana - had to laugh when we saw your lizard - guess it's reptile week!!
Thanks for letting us play!
Karla & Karrie
August 24, 2008

Anonymous said…
Love the lizards among the shadows shot. Very cool! Great job with the photo lineups. Thanks!

Rosebud Collection said…
Wow, what a picture..You are good..I love the lizard and happy you put two pictures up..You do such a great job on putting all the shadow shots together..Thanks for giving us all a fun day..
August 24, 2008

lol @ the lizard profiling for the camera. at my old apartment, there was a black stray cat that i was fascinated with. i'd always take pictures of her/him and the lil sucker would strike a pose every time! lil vain rascal, ha!
August 25, 2008

Tins and Treasures said…
Yes, the lizard looks like he is actually looking at you and smiling! I'm impressed that you were calm enough to take a pic. My hands would be shaking!!
August 25, 2008

GalleryJuana said…
love the shot of the lizard. He is definitely smiling! Wow, you are very patient with your stalking!
August 25, 2008

Ann said…
Wow! Those are some very beautiful and cool shadow shots! I especially like the spider shadow one, just as long as it doesn't crawl inside the house or on me.
August 25, 2008

Unknown said…
Hello T, this is one of the best SSS...love, love,love that lizard shot..isnt it so cute and sweet..ok, maybe not for touching, I'm afraid of lizards. You really do post some of the best SSS :D

Now those collages are awesome, just love how you match everything and come up with a theme..

Tks for linking me too, as you can see..I'm kinda off blogosphere during weekends haha..the family thing'y working out quite fine so far :D I've had big problems loading photos, at times, I had to load up to 5 times per pic...arggggh..so frustrating. I dont think the lizard was smiling..more like smirking @ me. YOu have a great week ahead, me going to do up my post on the wedding :D

thetinylittlegirl said…
oh i really love the top shadow showcase! the spider one is really cool. a toy?
August 25, 2008

Toni said…
Nice contrast with the shadowing and the rocks. Are these just wild where you live? The only time we would see a lizard like that around here is in a zoo :) He DOES look like he's smiling!
August 25, 2008

Debbie Doughty said…
That smile on his face sure put a smile on mine! You too. Thanks for the nice comment and invite you left on my blog :D That Mary Kate is such a sweetie. I've added my shot to Mr. Linky and will keep my eyes open for more shadow shots.
August 26, 2008

XUE said…
I'm not so crazy about spiders nor lizards altho in our last home (next to a tropical jungle), we did have the occasional huge hairy spiders, monitor lizards & snakes in our garden! Yikes!
August 26, 2008

Toni said…
Hey! Thanks for letting me know about the comments :) That's really nice to hear. Just to calm any fears - it was only a toy ;) The light was so strong coming through the window that I couldn't resist hanging the plastic spidy in there. As a little game we play at our house, we like to hide the spider in sheets and such to scare each other LOL Or, we'll just toss it at someone when they least expect it LOL Oh goodness! Thanks!
August 26, 2008

Probably doesn't mean anything to you, eh? From a commercial that got lots of airtime whenever the last big Hollywood Godzilla movie came out...
August 29, 2008

tatsuko said…
Love the shadows - what a great idea! I'm back to blogging so I'll be checking back to see more shadow shots :)
August 29, 2008

Amalou said…
Jeepers creepers! I hope that spider is smaller than it's shadow appears. I'm getting so much closer to purchasing my digital camera. (Actually been given permission to spend my tax return refund as my profit doesn't quite cut it this year. I can't wait to participate :-)
August 29, 2008