In ninja fiction, ninjas are supposedly able to become "one with the shadows" or, "a living shadow." In the manga, Naruto a special shuriken is named "The Windmill of Shadows." Also in Naruto, Shikamaru Nara possesses the technique to control a person's body movements once his shadow touches theirs. He can also manipulate his shadow into several shapes. Cool huh? I think I'd like to be a ninja!

The three Shadow Gallery collages this week feature one photo from each participant from last Sunday. If you’d like to participate in SSS, it's easy peasy! Shoot a shadow, post it on your blog on Sunday (or close to Sunday), then add your link to Mr Linky at the bottom of this post, and visit other players. Have fun! 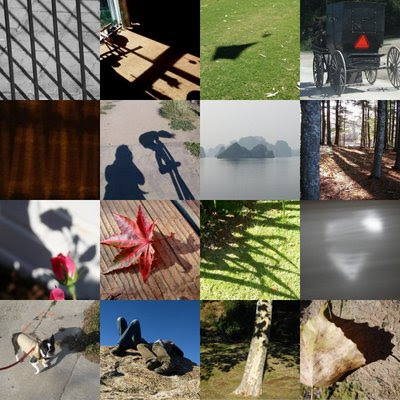 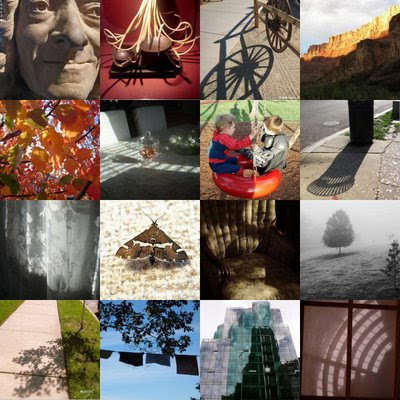 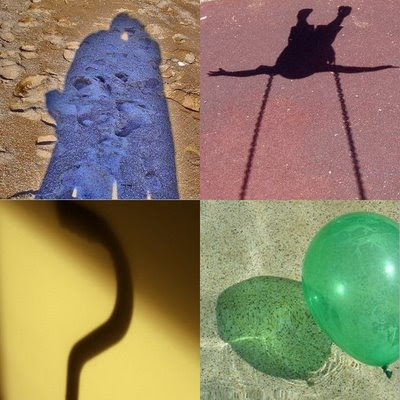 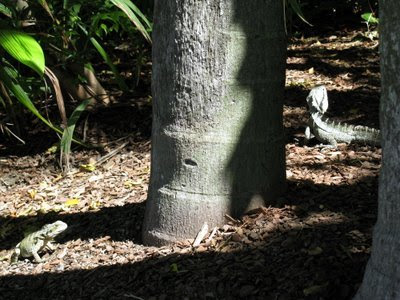 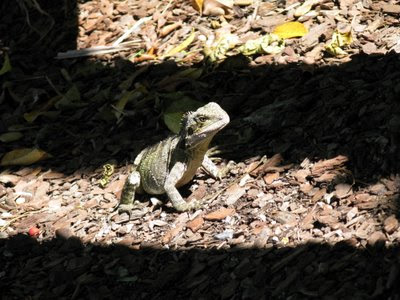 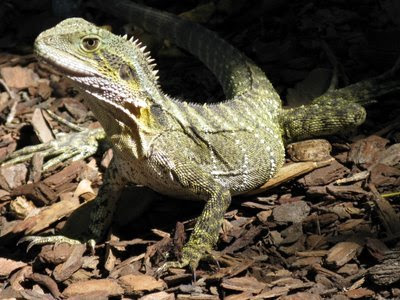 Yeah I know I’ve posted shadow shots of these critters before. I can’t help it! I love these lizards, so whenever I see them I feel the need to stop and take photos. They don’t seem to mind at all either.

I’ll not waffle on like I usually do (and don’t think I can’t hear the sighs of relief!) because more severe storms have been forecast to hit Brisbane tonight. So it’s very possible that lengthy blackouts will again follow, so I’m quickly drafting this post while I can and scheduling it to publish early Sunday. For those who don’t know, Brisbane has been smashed with horrendous storms during the week. If by chance my house blows away, I’ll at least find a little comfort in knowing the shadow shots will continue as normal.

High Desert Diva said…
Here's hoping the storm passes by and spares your house. Love the quote you found!

Chubby Chieque said…
Hope everything is OK where u r now & pray for ur all safety.

Rosebud Collection said…
Hope you are okay..I didn't know about the storms..Will be back tomorrow and check, when I put my SS up..Love the lizard/tree..I could look at these all the time..wonderful pictures..
November 23, 2008

Victoria said…
Oh my, I do hope your house doesn't blow away, or suffer any damage, (storms like that scare the crapola out of me). Hunker down and stay safe!

Super shadow shots by the way, and I always enjoy photos of your lizard friends!
November 23, 2008

Unknown said…
Hello T, I do hope that the storm passes by quickly and that you still have your roof while reading all the comments. Love the lizard and you must have a good zoom for the wonderful pics. Big hugs :D
November 23, 2008

Nice SSS you have, the lizard is so cute.

I hope you still beeing at home whith the roof on.

I have now post my SSS and you can find it on
http://solvarma-foton.blogspot.com/

You are so knowledgeable in the ways of the Ninja! I too would like to be one:D

I hope you and Sophie don't blow away...hang on tight!!! I'll look forward to hearing from you so I know you're ok...or maybe I'll go have a look at the Brisbane evening news online...now that I know how.

Claire, said…
Great shadow shots, my favorites are always the animal shots; what a gorgeous beast your lizard is.
Beautiful collages this week, I love the third set. And all the pattern in the second set make my eyes go crazy, bouncing around, looking. So beautiful when they are all put together.
Also I need to tell you you've won the Argus camera! So send me your mailing address caligastons@gmail.com
Can't wait to see how many people join in this week, too may people to visit everyone...
November 23, 2008

I sympathise with your storm! Melbourne had a battering last night too! Freezing winds around my mountain, Arthurs Seat, were simply horrendous! But apart from a few trees down this morning on surrounding roads, we are all in one piece! But there's more today!

Love your collages again of our shadow photos!

And finally your lizards! They are fascinating! They seem to pose for you!

EmBelISH said…
Hey T, great to meet you yesterday, yay we were spared from the storms (i think when they predict them they never happen, its the ones that creep up on us; like last sundays that are the doozies). Love the lizard shots.
x
Em
November 23, 2008

Gina said…
Wow, such beautiful shadows from last week, sorry I missed it! Love your reptilian shadows, such an interesting character!
We've had some wild, unseasonal weather here too, but nowhere near as bad as Brissy, hope it eases soon with no more major damage, hold on tight T Gxox
November 23, 2008

Gina said…
Meant to say how much I love this quote from Nick Cave..such an angry song, but love his stuff :D
November 23, 2008

maryt/theteach said…
I love iguanas. They are iguanas, aren't they, Harriet! Great job! Mine's up!
November 23, 2008

Alissa Nicolau said…
Your lizard is lovely. Mother Nature sure knew how to use her paint palette to its fullest with her creatures. He really is stunning to behold.

Now, are your storms dramatic and fun or just flat out frightening? I enjoy a good rolling and banging thunderstorm once in awhile. I've also been through a few tornado storms, with their purple then pea green then orange skies and then hush... no bird, insect, or animal sounds at all, hush... here it comes...
November 23, 2008

Ali said…
I think you already are 'at one with the shadows', ninja Tracy!
Great shots again this week. Hope you don't get blown away in the crazy wind today.
November 23, 2008

Mary-Laure said…
Great shadows as usual. Love the one of the little kid on the swing.
November 23, 2008

The Summer Kitchen Girls said…
Love the shadows on the trunk...and of course those cute lizards! Hoping you stay safe!!
November 23, 2008

A Wild Thing said…
What is with all these storms and winds...I just freak out all the time, as my house is surrounded by huge trees...eeeeeee...love the lizards and so does 'Scratchy'...great sport to chase...ha...cool shots!
November 23, 2008

Hey Harriet said…
Just thought I should mention that the big storm that was forecast didn't actually happen. Just very windy! The wind may have blown the big bad storm away! Yay!!!

Bobbi said…
Holy sweet large lizard!!! Do those just roam around down there?
November 23, 2008

dianasfaria.com said…
I love your little guy & I'm guessing he loves posing for you because he looks quite content.
Your collages are beautiful as always. I really like checking them out every week.
I'm happy I finally got to post a shadow shot this week! This is a great meme. Thanks so much for all your creative efforts and good luck weathering the storms.
; )
November 23, 2008

Amalou said…
WOW! interesting shadow shots in this week's gallery. Some of them still have me guessing.

I'm amazed how those lizards can stay still for so long. My dog can spend hours barking at a lizard while it's sitting still as a tree branch, pretending to BE a tree branch. Dogs and lizards obviously have way too much spare time!
November 23, 2008

Elizabeth said…
I think the third photo is my absolute favorite of these cool creatures.
Do update us on the storms and hoping you are safe.
love from New York!
November 23, 2008

Dianne said…
I'm so glad the storm blew away!! I bet your hair looks great, wind tossed hair is very sexy you know ;)

love the lizard. I used to date a guy who had all forms of reptiles and snakes - don't miss him but I do miss them

Christine said…
Fantastic lizard shots! It's late afternoon here on the California coast - I hope you have weathered the storm with minimal damage.
November 24, 2008

Anonymous said…
Hello T, running late this week!! i was going to post last night, but we had a big electrical storm and lost power!! Have been thinking of you guys down there, you would think a cyclone had been through with the damage done, i hope you are ok :0) Are those lizards all over Brissy? When Ken had Jesse down there for the last golf comp they were all over the course, they couldn't believe it, in the sand bunkers, where you fill the sand buckets and generally where ever you turned there would be one. he took some photos on his phone to show me. Fantastic shadow shots again they are cute little critters. Your collages a work of art and the ever growing list of people joining in all over the place, all cause of you!!! ;0) Hope the week ahead is good for you, did you get all your canvases finished for the exhibition? So many questions - sorry!! bfn. Ax
November 24, 2008

Anonymous said…
Glad the storm wasn't too bad.
Those shadow collages are gorgeous ! Going to try to remember to post something this week.
November 24, 2008

Anonymous said…
Hey T, i have just put my name in again cause the lovely Lisa from Retrostyle told me my link was broken, i really must check next time!! (thanks Lisa :0)) but i can't take the original one out, can you? if so thanks, if not, oh well it will just look like i am getting in early for next week, lol!! have a happy day. A:0)
November 25, 2008

Sweets 'N Greets said…
Oh God I love the lizards! Now, I am not one to touch them but I am absolutely facinated by them. They are quite graceful and very aware of their surroundings. Oh they must love it when they see you coming with the camera...look at them just posing like super models! HA!

Rosebud Collection said…
Just stopping by to send our love and blessings for a Happy Thanksgiving Day..Oh, I know you don't celebrate this holiday, but you will be with us in spirit..xoxoRosebud.
November 25, 2008

SandraRee said…
Hey T! I'm glad the big storm that was forecast didn't actually happen...I'll catch up soon with SSS, hopefully after the Thanksgiving Holiday...I'll save some pumpkin pie shadows. Maybe for the lizards if you don’t like pumpkin? :D Love your shadow shots and the collages are always nicely done. Miss you my friend. xo
November 26, 2008

AlasMyDear said…
i really can't figure how you did it, but you managed to make a lizard look cute!
November 26, 2008

XUE said…
We had a monitor lizard living in our garden, when we were living in Singapore & the house was right next to the jungle! We had exciting moments for sure! There was coverage of the Brisbane storms in the English newspapers here so it's good to hear that you are alright!
November 27, 2008

Impossible Alice said…
How did you fare during the storms? We didn't get it bad at all over here, we didn't even lose power!

GalleryJuana said…
Hi Harriet,
I hope the storm has passed and that all is well with you and everybody.

I think lizards are pretty cool too. I also enjoyed reading about Naruto.

No shadow shot for me this week, but I posted about my ghost dream and my latest painting.
November 28, 2008

Tessa said…
What a wonderful idea! And so many fantastic photos. I'd love to participate as well.
December 01, 2008