Dark Shadows was a Gothic TV soap opera that originally aired weekdays from June '66 to April '71. It was considered daring for daytime television when ghosts were introduced about six months after it began. The series became hugely popular a year into its run. Dark Shadows featured vampires, werewolves, ghosts, zombies, man-made monsters, witches, warlocks, time travel, and a parallel universe – (excerpt from wikipedia). The exciting news is that Tim Burton and Johnny Depp are teaming up for a big-screen remake. Woohoo! With a release date given as the year 2011. Oh geez…

The four Shadow Gallery collages this week feature one photo from each participant from last Sunday. If you’d like to participate in SSS, it's easy peasy! Shoot a shadow, post it on your blog on Sunday (or close to Sunday), then add your link to Mr Linky at the bottom of this post, and visit other players. Have fun! 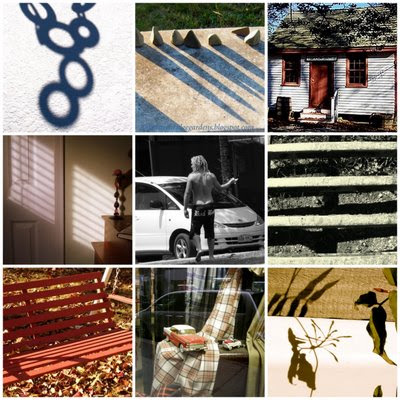 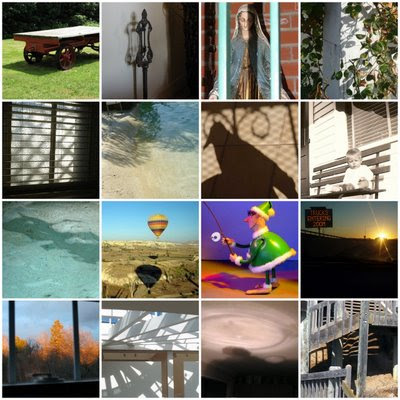 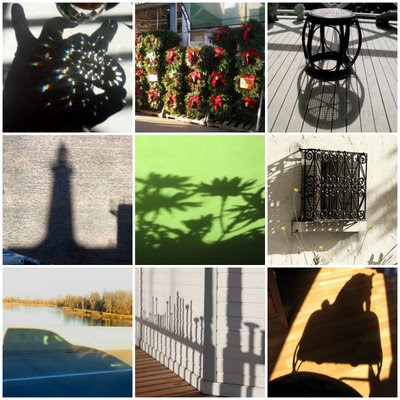 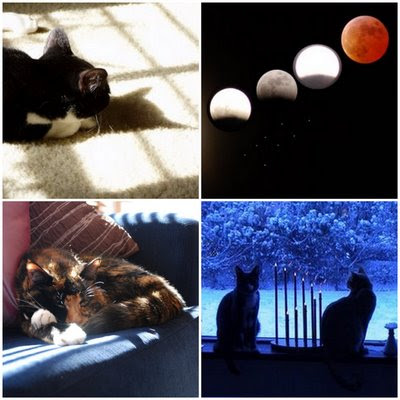 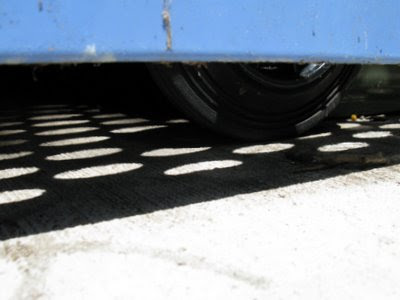 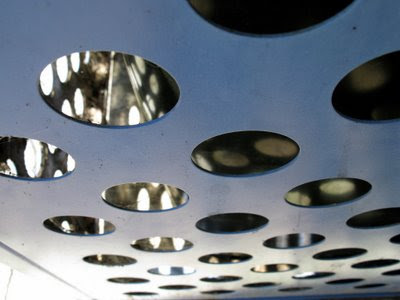 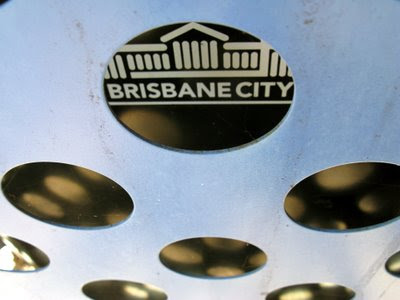 A set of shots taken of a council rubbish bin in Orleigh Park. The bin is enclosed in a big metal box, possibly to deter people from stealing it or idiots purposely tipping it over spilling rubbish all over the place. Whatever the reason I was happy to discover sweet shadows and sun spots cast onto the bin due to the design and patterns of the big metal box. I was much less happy about the smell of the bin. Ick!

Just a quick plug for a little art exhibit I now have over at Pandemonium Café (details in sidebar) called “Happiness is anyone and anything that’s loved by you”. If you’re a local and you’d like to visit to have a look at my paintings that would be lovely. In case you need further prompting, Pando's Café has exceptional coffee & oh-so-yummy food! And an all day breakfast menu! Oh how I love all day breakfast menus! I always feel this cool sense of naughtiness when eating breakfast late in the day. And that’s about as naughty as ol’ Harriet gets these days. I sometimes eat breakfast after midday. Yup. I’m such a bad-ass.

Sweets 'N Greets said…
It's only Saturday here...so I get to have Shadow Shot Sunday twice; Saturday AND Sunday! hahahahaha!

These are all so awesome! And how cool is that rubbish bin? I would not have guessed. And I love the cats. Too darn cute :-)
December 07, 2008

A Wild Thing said…
Let's play Tiddely Winks on those polka dots...cool shot...and oh the tales of Dark Shadows, I hadn't heard of this remake yet, but can't wait, they are a scarey duo. As a young stay-at-home Mum, I watched the soap faithfully every day. Boy you brought back some ghoulish memories.

Have a great Sunday Missy and good luck at the exhibit.

bobbie said…
Today you have found shadows - and really interesting ones! - in a rubbish bin. You are amazing. Where will you find them next?
December 07, 2008

GalleryJuana said…
Encouraging to find beauty in what most would pass off as ugly. That truly is good to remember when I can't think of anything nice to say.

Alissa Nicolau said…
Your shadow shots are great! I love how the dark and gray shadows show off the blue color.

Dianne said…
I love the top 'rubbish' photo best of all! :)

and thank you for always putting these wonderful collages together, it's so nice to see all the photos again

I was addicted to Dark Shadows!! It was on at 3 and I would grab my younger siblings and drag then home as fast as I could so I could watch.

I had such a crush on Quentin - or was it Barnaby - maybe both! Johnny Depp will do a wonderful job

Congrats on your exhibit. And enjoy all day breakfast, that's a bonus :)
December 07, 2008

Gemma Wiseman said…
I think I have stopped laughing long enough now to write a comment. You are just amazing! I have visions of you crawling around the footpath, in full public view, (like on a busy Saturday morning), taking those shots!

And then, just when I thought I could read the rest of your post through the tears of laughter, you tell me you visit Pandemonium Cafe and often after midday for breakfast! It was just too much! I was off again!

How I love your Sunday postings! Always so informative entertaining! And so love your collages still!

High Desert Diva said…
You are such an intrepid shadow shooter...always finding the best shots!
December 07, 2008

Unknown said…
What a creative shot! I was wondering what on earth are those circles..you certainly go the extra mile for any shots. I dont think I'll be poking around any dustbin but then our dustbins arent exciting like yours. Happy Sunday T :)
December 07, 2008

Michelle said…
Fantastic shapes and colours, I love your pics, thanks for sharing :D
December 07, 2008

Intresting shots you have caught.

And thanks for the great job you are doing, very well done.

Victoria said…
Cool shadow shots! I like their abstract nature and never would have guessed that they were trash cans.

Yippee about the Tim Burton/Johnny Depp Dark Shadows movie!! Back when the show first aired in the 60's, (I was about 5) I wasn't allowed to watch it as I was prone to nightmares. My mother would send me outside to play when it came on. I always went to the neighbors house during that time, as all the kids there were allowed to watch it and they were happy to let me join in on the fun! (My mother never caught on!)

Hot Fudge said…
Can I ask what you were doing scavaging around a council garbage bin? Maybe that's best left unanswered. Whatever the reason, the results are brilliant.

Now for a confession. I do remember the Sixties, but I'll be damned if I can remember anything called Dark Shadows. Anybody else want to own up to that? But I'll sure be on the lookout to see the Johnny Depp version.
December 07, 2008

Anonymous said…
The collages are extra fine this time, I think. And your post looks like scenes from a spaceship! Cheerful and spooky both. Nice!
December 07, 2008

Anonymous said…
Would love to check out your exhibit but unfortunately I'm not in the area =( I agree about all-day breakfasts. In a perfect world I'd scrap lunch and dinner and just eat breakfast 3 times a day =D
December 07, 2008

Christine said…
Another fine shadow shot round-up. Sigh, so many wonderful blogs to visit. So little time. See how late I'm up?
December 07, 2008

Kat said…
ah it's the ever travelling bin shadows :) I think we need a exclusive bin Sunday! I love the dot shadows underneath, great stuff! I have never been to paddington might have to try to venture there soon for a look at your exhibition!
December 07, 2008

Rosebud Collection said…
Now that is a neat shadow..worth the smell of the bin..Good job..I like breakfast too..My favorite meal of the day.
December 07, 2008

Elizabeth said…
What an artistic rubbish container.......nothing so round and photogenic round here.
The photomontage of the CATS was amazing.
Perhaps I'm just a sucker for animals - but it was splendid.
Hope all is well with you and that you are cheerful?
December 07, 2008

Anonymous said…
Success with your art exhibit. the shadow galleries are very attractive and interesting again, I can look quite some time at them. 'Dark shadows' coming up, I don't know it, but if you recommend it's noted.
December 07, 2008

Sherrie said…
Hi!
I like your rubbish can shot! The different shadows showing make it look totally different. My shadow shot is posted. If you want to take a look it's here:
RAMDOM THOUGHTS FROM ME!!: SHADOW SHOTS

dianasfaria.com said…
thanks for providing us with these lovely shadows despite the icky smell! They are rather neat shadows I should say.
I wish I could visit your show. I love art & I guess I am a bad ass too because I could eat a good breakfast anytime of day! LOL...
December 08, 2008

maryt/theteach said…
Can't imagine, Harriet, that you got under that trash bin to take your shots! Ha! We photographers do anything for a shot! :)
December 08, 2008

Unknown said…
I'm thinking of having a bumper sticker for my car made up: I Brake for Shadows. :-D

And my brother and I loved Dark Shadows. It was on after school when we were kids. 4 p.m. if I'm not mistaken. It scarred the bajeebers out me but I could not resist it. My older brother, of course, made good use of the material to frighten me after the sun went down. :-O
December 08, 2008

Lisa's RetroStyle said…
Oh you are a bad-ass! The horrors...breakfast after midday!!

I had a friend that loved Dark Shadows...always had to get home in time to watch it! I think I was too young to get it...she was a few years older than me. But Johnny Depp always sounds good:)

Lovely collages. Great trash bin shadows!! Thanks for suffering the olfactory insult so we could appreciate all those circular shadows!
December 08, 2008

SandraRee said…
You have definitely taken shadow shooting to a whole new level. Your SS last Sunday was adorable and many congratulations to Elizabeth. :D

I loved Dark Shadows, can’t wait to see the remake with Johnny Depp.

I never thought that shadows will be a big issue, till now. I love them!

lucy said…
The collages are beautiful and I loved Dark Shadows! This is my first time playing. I have an obsession with shadows and reflections...I wonder what Freud would say about that?
December 08, 2008

Tessa said…
Wow! You never fail to make each and every Shadow Shot photograph look wonderful in your collages. Works of art in themselves - fantastic.

The bin shots are absolutely amazing - how clever you are to have spotted those ('suze the pun!) shadows on a trash bin of all things! You've really given me a darn good nudge to look for the unexpected. Thanks, Tracy!
December 08, 2008

Jade said…
Hi Harriet, thanks for visiting my blog!

You got me all excited to see there was a new Tim Burton/Johnny Depp movie coming out, only to be super disappointed seconds later when you said 2011!!!

Great pics too - I look forward to reading your future posts :D
December 08, 2008

The Summer Kitchen Girls said…
Hey Tracy! Just got back from Vegas and popped in to play....neat shadow this week...I guess it's true...another person's "trash" is another person's cool shadow shot!!
Hope your having a lovely week!
Now...off to check out those shadows!
December 09, 2008

please sir said…
So pretty...love the very first one - chains, jewelry? Either way...keeps me guessing!
December 09, 2008

Gina said…
So sorry I missed it..the collages look amazing. Another grey week down here..so hopefully be back to SS from next weekend...have missed it! Gx
December 13, 2008