Today is the first day of winter here in Australia. Aaaaarrrgh! I'm over it already. I was over it about three weeks ago before it had officially even started. Roll around spring! This clever winter inspired drawing by Alicia Sometimes did at least alleviate the winter blues briefly and put a smile on my face. 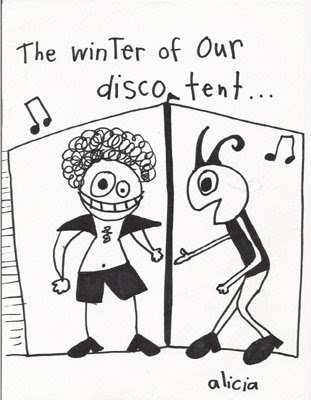 Alicia Sometimes is a writer, poet and musician from Melbourne. Also a doodler as I recently discovered. And a funny one at that! 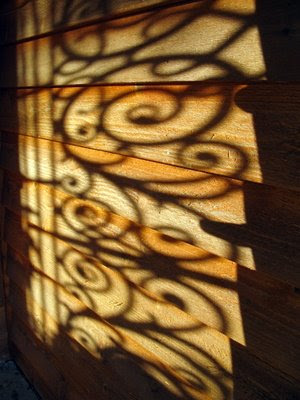 SandraRee said…
The drawing by Alicia Sometimes is too funny. :)

Harriet you are one super talented gal,that shot is amazing!
June 01, 2008

Tizzalicious said…
I lvoe the picture!

Unknown said…
Hey T, now this is a wonderful shot!! Love the intricate detailing and you are getting better everytime!! Beautiful, is this taken from your home?
June 01, 2008

Lisa's RetroStyle said…
Tracy,
I've been so busy emailing you... I forgot to read your blog...I've missed two posts! I'm sorry I lost, but I'm glad Sandra Ree won. I love your bongo boy and Asain girl they are so cute.What a clever way to announce the winner.

I'm sorry you're sick of winter already...but I'm just starting to get into summer and there is no way I'm sending it back yet...you had your turn! I'll return it in about 3 months...so just hang tough friend! Let the rest of us get warmed up!!!

Alicia drawing is pretty funny!
I love today's shadow shot!!! I usually do Show and Tell Sunday...but I'm not too into the topic this week...or maybe I'm just lazy, I should try a shadow shot for my post tomorrow/Sunday.

Bec said…
He he, I just snorted tea out of my nose after reading that doodle. Thanks for making me giggle on a dreary Sunday morning :)
June 01, 2008

Not surprisingly, considering who I am married to...I love the wrought iron shadow (and the Sandburg quote). In fact, ol' Carl was a runner up for my quote 'cause I'm playing Shadow Shot Sunday, too.
June 01, 2008

sound&fury said…
Love the doodle... and yes, winter: over it. And you know what else I'm over? People telling me that because I live in Brisbane that I have no right to complain that it's too cold and what about the people in some other place where it's *actually* cold... I tell you, it's the starving children in Africa argument applied to climate!
June 01, 2008

Hey Harriet said…
Diva -
Who said that shadow is from wrought iron? It may be a shadow cast from a fancy tree from my fancy garden ;)

Sound & Fury -
You're too funny! But yes I know what you mean. I hear you! Many people believe that winter bypasses Brisbane altogether! Yup. I'm wearing 5 layers of clothing just for the fun of it...
June 01, 2008

Rosebud Collection said…
Darn, I forgot about shadow shot..
I have to write things down..it isn't nice getting old.
June 01, 2008

jodie said…
I love love love your shadow shot!
As for winter, I'm actually enjoying it down here in Melbourne. Brrrr.
June 01, 2008

Victoria said…
Great picture! I need to start looking at the shadows around me, start shooting, and play, too.

My condolences to your entry into winter, I hope it is mild and that spring returns soon! (In the meantime I suggest that you erect a tent and start dancing!)
June 01, 2008

Unknown said…
i really like that photo - very impressive. I love your work on etsy too :)

woolies said…
I'd trade you in a heartbeat. Here in the wild southwest USA, it will be 104 degrees tomorrow. That's farenheit.
Sweltering.
June 02, 2008

littlebird said…
ha i had not thought of that, just as i am all geared up for summer here in Scotland, you are thinking about winter : )
Liked the doodle and nice quote.
June 04, 2008