I recently visited The Workshops Rail Museum in Ipswich. I’ve never really been interested in such things as heritage rail machinery and locomotives, and visiting this museum didn’t change my feelings about the subject. That’s not to say that the museum isn’t good. It's good. It’s an award winning and very popular attraction. Just not my cup of tea. I thought it might be an interesting location to take some TtV photos. It wasn’t. I did manage to take a couple of photos. I would like to introduce you to ol' Gertie the Garrett. 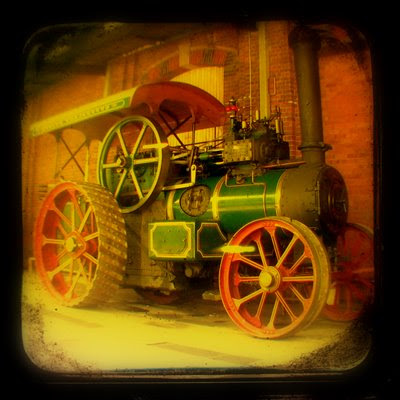 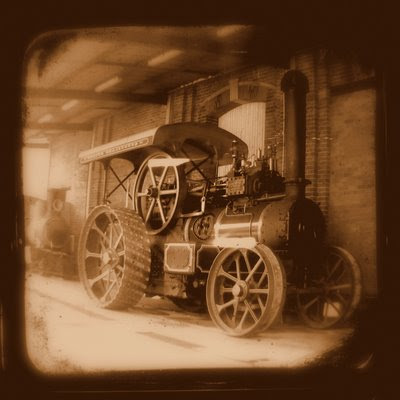 I liked how these ones turned out. This was my very first time playing around with my newly acquired ‘dirty lens’ Argus 75 camera. I'll be listing these and a few other photos in my shop in the next day or two. There very well may be a rail enthusiast out there who'd be keen to snap up a TtV print of a circa 1914 Garrett Steam Traction Engine. Just maybe. It's a crazy world! Hey, I'm bloggin' about Traction Engines!

The beginning of my week was met with a very sweet surprise on Monday. I won a giveaway that the awesome Ali was running on her Charlie and Grace blog. Look at the cutie that I was lucky enough to win! 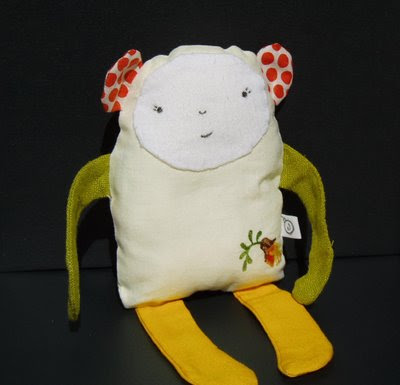 This is April Bear. Isn't she adorable? The winner (me me me!) was entitled to choose a fave Little Jelly from Ali's Etsy shop, and I chose April. It was a difficult decision to make as they're all so lovely. Many of the designs are inspired by drawings made by Ali's little boy. They sure make a dynamic duo! Currently Ali is donating 50% of all sales from Little Jellygnite to the Red Cross Bushfire Appeal. So it's a great time to snap up one (or more!) of her Little Jellies for a very worthy cause. Onya Ali and thanks so much! xo
Email Post
Labels: Inspiring Artists TtV Photos

Lisa's RetroStyle said…
Wow...you're really branching out...great Ttv Traction Engines!! What will you find next?! I think they are very cool. There are lots of tractor enthusiust here. They even have whole multi day festivals dedicated to admiring them:) They would reeeally love your tractor Ttvs!

Am just passing by to check what your up to nowadays! Any news from OZ bushfire?

Have a wonderful Wednesday and week ahead...

Victoria said…
I like your train ttv's!
Clever idea, and it makes me want to go and visit our massive old train museum again, (and I thought once would be enough, ha!) Puts a whole new spin on it viewed this way.

Anonymous said…
those photos are stunning harriet. they look as though they were taken circa 1914. my dad is one of those rail enthusiasts that you mention. it's his birthday soon and i'm thinking he'd appreciate one of these prints as a gift!

Anonymous said…
i just went to your shop and found that you haven't put these ttvs in there yet. i didn't see that part of the post before. will check back later then.
February 18, 2009

Chris said…
That train is awesome and I love the black and white version.
February 18, 2009

Unknown said…
Those Ttv pictures are really something and I am learning to appreciate them very much. You won a giveaway..congrats..no way you are sharing with me right? Greetings from Bangkok..the conference is getting really dreadful :( ciao for now
February 18, 2009

edward and lilly said…
Lucky you for winning the giveaway, they're such little cuties.
February 18, 2009

keiren said…
Very nice TTV photos! They have a lovely vintage look to them! You're working some magic with your argus camera. Or is it cameras? You have 2? Clean argus & dirty argus? Lucky girl on the giveaway win. Nice start to your week!
February 18, 2009

Anonymous said…
I'm liking those ttv photos Tracy, i'm sure they will get snapped up. congrats on your win, what a little cutie :0)Have a good week:0)
February 18, 2009

Hot Fudge said…
I am married to a steam locomotive nutter, so I won't even mention your pics to him, as lovely as they are! And I adore the Little Jelly made by Ali. If I couldn't win it, I'm glad it went to a worthy home.
February 18, 2009

Paula Scott Molokai Girl Studio said…
How cool is that? You won the bear!! Congrats! So cute too!
And what lovely, lovely photos from the "dirty camera"!Those trains really lend themselves to the image style of the camera. Wow!
I've been thinking lately of what would happen if I bought some clear glass filters and did things to them to get effects like this off my digital SLR.
February 19, 2009

Anonymous said…
I like the photos. Dirty lens? Interesting name. Congrats on your win!

Anonymous said…
just dropped back in to ask if you could email me when you've put the gertie prints in your shop?

Ali said…
I love the workshops museum! I went there with my dad, a little friend (he was 10 at the time) and Lach - 3 train-crazy boys - but I had a fun time! I really love the old brick buildings! Gertie looks great in your pics!
... and thanks for the jelly 'plug'!
x
February 19, 2009

Janis said…
April is so cute! What luck.

And yes, your railway photos will find much appreciation. My grandmother (recently gone, sigh) was enthralled with anything railway as that was her father's career. Probably about that time period too. She would certainly have been a fan.

picciolo said…
what a lovely prize! And your train pictures are so atmospheric
: )
February 20, 2009

Gemma Wiseman said…
I too am not a train freak, but I have learnt that some old trains make very artistic subjects.

Rosebud Collection said…
I think the pictures are great.
Congratulations on the win..it sure is cute.
February 23, 2009