Wellington Point (also affectionately known as Wello Point) is one of many of Brisbane's charming bayside villages, and only a 30 minute drive from downtown Brisbane. King Island, is a tiny conservation area attached to Wellington Point by a sand spit and people often walk out to the island at low tide. With the exception of the unpredictable and ever-changing weather on the day that I happened to take a stroll along the sand spit, it was still an enjoyable trek. Many others appeared to be enjoying themselves also. I walked past energetic children collecting seashells, cosy couples walking hand in hand, happy dogs frolicking in the water, and a couple of kitesurfers sailing by. It was a fun four seasons in one day kind of a journey... 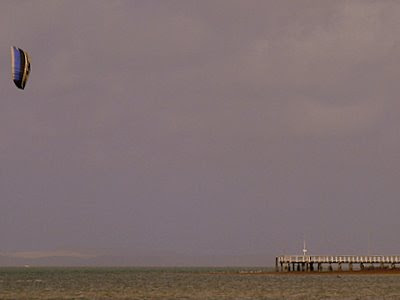 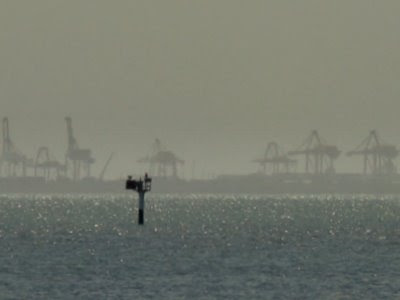 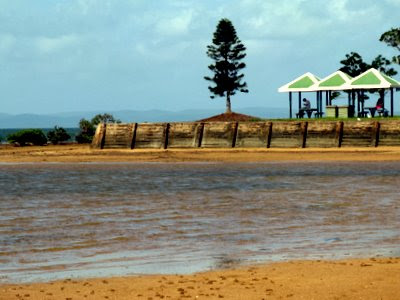 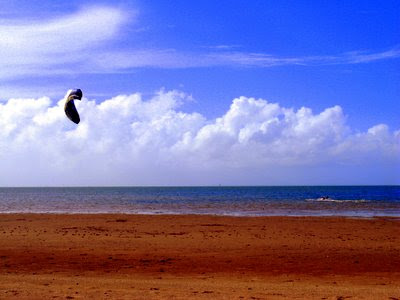 Summer
If anybody can help me identify what those things are in the 'Winter' pic I'd be most appreciative. A couple of the objects look like giant giraffes to me. As much as I would like for them to be giant giraffes I don't think they are. If it helps any, I took the photo standing at the most southern end of King Island, aiming my camera north-west across the bay. I thought I was looking towards where the airport may be? Sorry, I'm hopeless with directions. If someone could possibly help me out that would be great. I am very curious. And baffled. And I am beginning to obsess about giant giraffes roaming around the streets of Brisbane...
Email Post
Labels: Random Happy Snaps

Jodie said…
I found your blogsite link in your cute etsy shop and just had to visit. Beautiful photos!

I'm sorry I visited empty-handed. I promise to bring cake next time ;D

Victoria said…
Oh my goodness, how beautiful! I could live there so happily!

Possibly, the giant giraffes are actually the shells of the tent like things pictured in the Spring pic? What ever they are, I like the idea of giant (friendly) giraffes roaming the streets!

PS. I have no sense of direction either and have been known to get lost just going around the block.
April 08, 2009

Awesome pics! The 'autumn' one is breathtaking. Love the simplicty of that one. Perfecto! As for those things in the 'winter' pic I think they are giant giraffes. No doubt in my mind! Have a great day Harriet!
April 08, 2009

Scrap that thing about me being first. Sheeesh! Gotta be quick around here!
April 08, 2009

please sir said…
Wonderful photos - love when seasons can be shown in a lovely way.
April 08, 2009

Lisa's RetroStyle said…
Wow! What a variety of sky conditions all on one day. Looks like a beautiful place to be on any day!
Of course I have no idea what the giraffes are...but they look like drilling rigs or cranes to me?!
April 08, 2009

Rinkly Rimes said…
Definitely some nasty beasties ganging up on that poor little whotsit in the centre!
April 08, 2009

XUE said…
It IS a giraffe! Or maybe a submerged remains of a lighthouse or an oil rig - how normal reality can be.
April 08, 2009

Chris said…
That must be a harbor in the winter pics because those look like offloading cranes. They can pick up a semi-truck trailer at a time off of a ship and put them on the ground. Pretty massive pieces of machinery.

I grew up fishing near Blount Island in Florida and saw these all day long as a kid. Great shots, brings back memories of cast netting, crabbing and fishing!
April 08, 2009

Unknown said…
Hey T, wow...4 seasons in a day and I thought you took them throughout the year, you clever and sneaky bunny you. Yes..those do look like some giraffes on the loose, I should post the picture of a wild boar I took from the island..you should have seen him, he desperately needed a shave haha..not a bit pretty at all. Do find out if giraffes roam on the street...I'll try not to visit ;p hugs/m
April 08, 2009

Paula Scott Molokai Girl Studio said…
Four seasons in one day is amazing! But, I was hoping that you were going to explain the giant giraffes! I thought perhaps they were oil rigs or something from Star Wars...
April 08, 2009

ARTISANNE DESIGN said…
Beautiful pictures, I can relate to the 'four seasons in one day' scenario living in Scotland!! Think I'd be with the kids collecting shells, bliss!

Rosebud Collection said…
You know, they look like drilling rigs..not sure. Pictures are wonderful..It is such a nice feeling to walk on a beach..very peaceful.
Weather is crazy here, as you saw.
This has been one winter I don't care to repeat..still pumping out basement..
April 08, 2009

Annie said…
Yes, they are cranes, you can see them when you are at the airport across the river...at the industrial part of the city...as another commenter said, probably for unloading and loading all the ships that come in and berth down there at the mouth of the river!
Ah, I love all those bayside suburbs!
April 08, 2009

red.door.read said…
lovely series of piccies. i love the ocean in winter.
April 08, 2009

Your winter shot is of Fisherman's Island and they are container ship loading cranes. How do I know? I asked my husband, who knows all.

cara said…
Beautiful pictures - and a gorgeous place - I only just discovered it a couple of months ago. Unfortunately the tide had come in so we couldn't walk over to the island.
April 09, 2009

Bec said…
Hmmmm, I don't know what they are, but I have a sneaking suspicion that they are related to the giant creatures often seen in outback Victoria that as a kid I used to think were the tripods from the John Christopher novels (I think they were some sort of big telegraph or electrical thing, but they really do look like giant aliens marching across the bare outback).
So um...yeah. Distant relatives of alien tripods. I'm pretty sure that's what they are.
:)
Happy Easter (and Grouse Thursday!)
April 09, 2009

Kym said…
Those things look like oil rigs...but then again, maybe they are giant giraffes....I really love the summer one, nice clouds!
April 09, 2009

cabin + cub said…
great to see all four seasons
might the giraffes be coal ports?
there are similar looking things here too, and i think they transport coal onto trains and ships.
April 09, 2009

GalleryJuana said…
Maybe the loch ness monster and his family is moving over to Australia ... he ehh..hee.

Great change of color and feelings in these photos!
April 09, 2009

Maggie May said…
They do look like giant giraffes!

donat said…
great captures! i wanna take a walk across the sand spit and gaze at giant giraffes! because of your post title i now have that crowded house song stuck in my head. have a nice easter break harriet.
April 10, 2009

Elizabeth said…
Super photos!
My friend Margaret, an artist longs to join in SSS
How does she join for the first time?
April 10, 2009

Am glad to see the difference between all seasons. Just like our lives. Changes makes difference.

I know exactly what those giant Giraffe things are...

They're the Imperial AT-AT Walkers. The AT-AT is a large four-legged walker. I've only seen them at the 'Battle of Hoth' in 'The Empire Strikes Back'. I think one may have had a guest star appearance in 'Return of the Jedi'.

I've never heard of the AT-ATs hanging out at Wello though! I guess they must be holidaying ;)
April 11, 2009

The Fab Miss B said…
The colors in the summer shot are just gorgeous! Must get to that beach, come hell or high water!
April 11, 2009

Sam said…
Yay! Love, love your blog - found it by chance! As for those "thingies" - hmmm - oil platforms? extras from the "Matrix"? Maybe you're right and they are giant giraffes! Lovely photos though!
April 11, 2009

robin. said…
beautiful pictures depicting the seasons...i think the winter objects are cranes but like the thougts of giraffes much better.
happy Easter...
April 11, 2009

Gemma Wiseman said…
Thoroughly enjoyed every bit of this post including all the varied comments! You have stirred up a hornet's nest of buzzing ikdeas! Good one!

Well, I believe they are cranes because they are the same shape as ones I saw at the container terminal in Sydney! Huge beasts!

But much prefer your giraffes and even the alien tripods idea!
April 12, 2009

Sara Chapman in Seattle said…
They look a bit like giraffes, or the ones at the water's edge here in Seattle seem to resemble cranes, which they are! Not the birds, of course. They lift those big boxes of things which go onto trucks and trains. I saw one in action once and it was amazing.
April 12, 2009

Cate Holst said…
I personally think they're rejects from a Star Wars set!

I only thought Melbourne had 4 seasons in one day (am I going to get into trouble for that comment?)
April 12, 2009

t said…
thats the port of brisbane. they are cranes like people have speculated
May 29, 2009