Fun at the Fair

Recently I went along to the Ipswich Show and it was my first time attending this annual event. It was much like Brisbane’s annual Show (aka The Ekka) but on a much smaller scale. It had the usual amusement rides, sideshow alley, livestock displays, exhibits pavilion of arts and crafts and many food stalls. Before heading along to the show I read that there’d be a variety of ‘gastronomic delights’ so I was quite excited about this. I discovered a stall selling dagwood dogs. And then another one selling dagwood dogs. And another…and another…but I never did stumble upon those ‘gastronomic delights’ in my travels. Never mind. Junk food is exactly what I always expect to find at these events and the dagwood dog I had didn’t disappoint. Wish I could say the same about the woman who sold it to me. I also purchased a waffle cone from her but as soon as I took one step away the big blob of cream on top of my cone plopped off onto my shoe. I looked up very sadly at the dagwood-dog-waffle-cone-woman expecting her to offer to top up my cone again but all she said was “I told you to be careful.” Grrrr. Why on earth dagwood-dog-waffle-cone-woman didn’t squirt the cream inside the waffle cone rather than constructing a dairy replica of Mt. Everest on top I just do not know. Apart from that incident it was a fun day. Here are some TtV photos I took while wandering around. 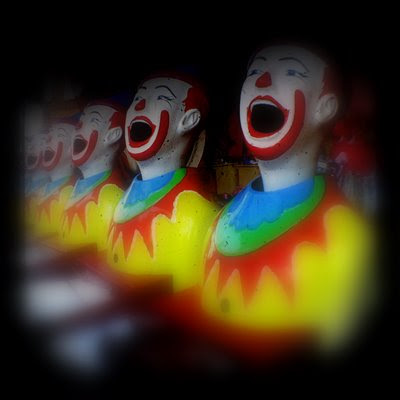 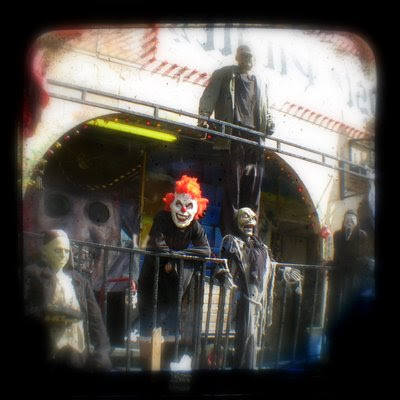 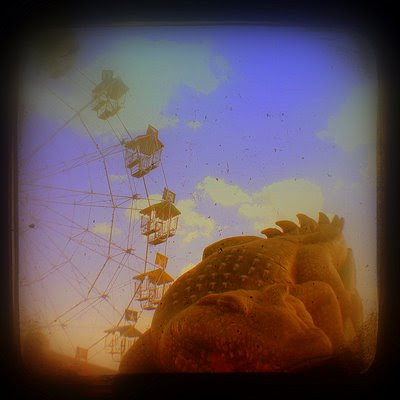 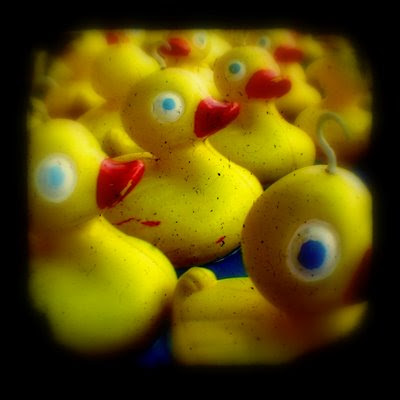 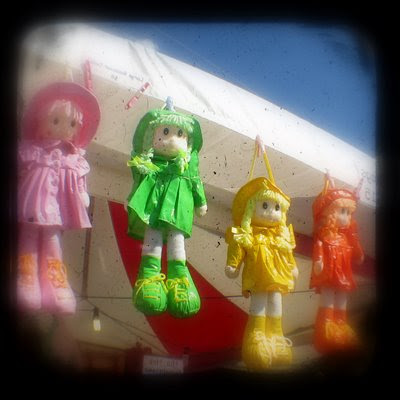 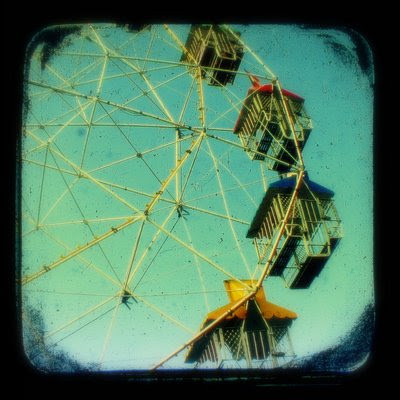 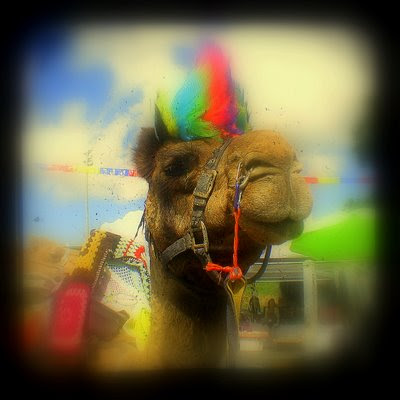 I loved this carnival camel with his colourful mohawk. He was very friendly. I've always been concerned about the treatment of animals in these sorts of environments. The camel did appear to be healthy and happy. And the man who cared for him spoke of his furry friend with such fondness that I was left with the impression that the camel was well looked after. This last photo is my submission to Color Carnival, which is a great new photo meme that commences each weekend and runs all week long. What a fun idea! Join in!

(I believe dagwood dogs are known as corn dogs in America. Just in case anybody was confused by that)
Email Post
Labels: Random Happy Snaps TtV Photos

Martha@A Sense of Humor is Essential said…
These are wonderful, I can smell the popcorn, cotton candy, and animal dung! Thank you for visiting my blog also. This is a fun meme.
May 20, 2009

Bentley's Photoblog said…
The fancy camel is great but I love the clown photo the best! Thanks for mentioning that meme. I'll have look to see what I have in my photo folders and hopefully join in.

Dorte said…
Not a very service-minded icecream vendor I must say.
These photos are great - no 2 of the clown reminds me of one scary movie I watched when I was much too young though :-)
The one of the camel is so great ...
I will have a look at the color carneval as well.
May 20, 2009

Sarah said…
Bad dagwood-dog-waffle woman! I don't know! I love your photos but do not know what ttv is-what is it?! It is great whatever it is.I am taking part in a colour week at the moment weirdly enough-the colour meme here looks good!
My favourite photo is the second one with the two clowns. Terrifying!
May 20, 2009

Victoria said…
Oh my goodness these are so wonderful Tracy!!

I especially dig the ducks, as that was a game that my girls always loved to play at the local carnivals when they were little!

So sorry about your ice cream incident... I would have been so pissed and sad, (I do like my waffle cones and fully expect the ice cream to go all the way down.) Maybe late at night the clowns will get that nasty lady... fair karma!

keiren said…
Fantastic TtV captures! There is something about fairs/carnivals that is just really eerie. The second photo of that clown staring right at me I'm finding very disturbing. Then I discover a giant crocodile thing in the next one...nightmare material! Sorry about that heartless waffle woman! She sounds frightening too!
May 20, 2009

cara said…
Isn't that a funny co-incidence?? i love all your photos and have no idea what TtV is so I'm off to look it up. Shame on that ice-cream lady. Heartless wench.
May 20, 2009

Martha said…
Glad you had a good time (besides the ice cream incident anyway) - you sure got some excellent photos!
Thanks so much for playing along on Color Carnival :-)
May 20, 2009

That is the chicken said…
What a great set of photos! The camel is my absolute favourite! I love the poloroid effect..I have to figure out how to do this. Do you use photoshop?
May 20, 2009

Catherine said…
love the retro feel to these shots in the way you have framed them...especially the Big Wheel..those ducks definitely look hypnotised!!
May 20, 2009

Unknown said…
Hey T, tks for the explanation of dagwood dog..I would have no idea what was that! What a fun adventure, too bad the ice cream fell off. The first 2 pictures looked kinda scary though, reminded me of this scary movie revolved around the circus, I hate scary movies and never see them now. However, when I was younger, my dad loved them and I had to tag along to watch all those gory movies...anyway, the Ttv collection is fabulous..as usual. It's Wednesday already..and I was still thinking of your SSS anniversary, but they hey...it's weekend soon :P hugs................M
May 20, 2009

Brandi said…
Sorry to hear about your ice cream...and the dumb lady who served it to you! Love all of your pictures...the second clown one really creaps me out though. They look like they belong in a haunted house chasing people with chainsaws! Aaaaa!
I really love the ferris wheel and your color carnival entry. I think they are my favorites today!
Have a nice day!
May 20, 2009

Chrisy said…
Lovin every one of those ttvs...so colourful and exotic (hard to believe they were taken at Ipswich)!
May 20, 2009

Margaret Gosden said…
Great shots. Thanks for the heads up about the Color Carnival. It is interesting how the English language
evolves into new names for the same item, as in dagwood dogs - being English I would have guessed that meant hot dogs.
May 20, 2009

Lisa's RetroStyle said…
OMG, I love your Ttvs!! My faves...the ferris wheels(#2 is especially cool), the duckies & the camel. They are all great. The clowns are really cool but kind of freak me out. Ever since I saw IT (Stephen King)I haven't looked at clowns quite the same:]
Dagwood-dog-waffle-cone-woman needs to get her act together. She must either not know how to properly construct an ice cream cone or gets some sick joy at watching people drop them on their feet. Shame on Dagwood-dog-waffle-cone-woman.
I'm glad to know that carnival camel seems happy. I hope he is. I don't care for the ring in his nose. I don't know much about camels but I don't think they usually wear nose rings.
May 20, 2009

sunnymama said…
What a fantastic collection of colourful picures! So much fun :)
May 21, 2009

Monica said…
What a wonderful series of photos, I felt as if I was there too. Beautifully done.
May 21, 2009

Love carnevals! Too nostalgic for me. I can see my youth and ohh! cotton candy & the circus? Adore the artists.

Have a happy Thursday, downunder!

Ali said…
Wow Tracy! These are all fabulous photos! Love them - so full of colour and beautifully framed ... I'm not sure which is my favourite ... maybe all of them!
May 21, 2009

Sandrine said…
Yes, Robyn must be right the second photo must be your d dog lady!!The photos are great a nice feel come from them with the mix of colours and effects.
May 21, 2009

Sandrine said…
This comment has been removed by the author.
May 21, 2009

Marilyn said…
These are all gorgeous shots! Very festive!
May 22, 2009

Anonymous said…
Beautiful photos. I love the camel, ferris wheel and ducky shots, they're little beauties. The clowns and hanging dolls kinda spook me out a little. Although I do suffer from bozophobia, seriously.
May 22, 2009

GalleryJuana said…
I like the photo of the sinister-looking clown. The cone lady was not very nice, but glad the rest of the day was great.
May 23, 2009

Gina said…
So sorry about your ice-cream..that's the pits :( dagwood dogs take me back to my childhood..that an fairy floss!
That's what I named my favourite doll..love your ttv's..and the clowns are quite scary!..what a groovy mowhawk! :) Gx
May 23, 2009

Sandrine said…
Yeah, got a new camera...one that does it by itself!I might be able to pretend I ok now :0)!!Thanks for your comments my way...By the way, it makes me happy to see a Jean-Luc Goddard comment on your page, cool! :)
May 23, 2009

Rosebud Collection said…
This looks like fun..but was very disappointed with the woman that sold you your ice cream cone..Poor business.
Your pictures were really very interesting and I like the way you did them. Your submission to the Carnival was lovely, actually quite bright and happy..
Glad you had fun..
May 23, 2009

Cindy said…
Wonderfully sinister clowns! Captures the way I feel about them perfectly.
May 23, 2009

PJ said…
Beautiful and smart shots, I love your TtV work, it's just endlessly fascinating.
May 24, 2009

MyMaracas said…
Beautiful,beautiful work. The TTV technique transforms the carnival into something so strange and surreal. I've tried TTV, but I must not be doing it right. Hats off on your spectacular success with it!
May 24, 2009

Paula Scott Molokai Girl Studio said…
You really have this Ttv down to a science! These are so cool! I love them all.
May 24, 2009